skip to main | skip to sidebar

Unconditional Positive Regard and me

Over 40 years ago I was young, silly, worked in a factory at a local dairy and went out drinking and dancing most nights. Then I decided I needed my GED and would need tutoring in math to pass the test. So dear neighborhood friends suggested that I request tutoring at a local neighborhood organization called WAITT House (We're All In This Together) run by a Franciscan priest attached to a local parish, Father Ralph DePasquale. I took their suggestion and signed up. I then wanted to volunteer as a thanks. Thus began the rest of my very different life. Father had a PhD in Philosophy and taught at what was then Maria College. He offered free classes on lots of topics in the basement of the Parish Hall. I started attending. I continued my factory job, continued volunteering too. But Fr. Ralph had other plans for me. He said I had to get a college degree, I was wasting my brain and my abilities. I ignored him for a very long time. Father eventually asked me to be his Children's Program Director and Tutor CoOrdinator. And he told me I had decisions to make...did I want to live a life based on charm and silliness or substance and that I had to decide, cheese or children? (it was a cheese making plant I for which I worked.) He had a private heart to heart chat with my mother, much to my embarrassment and chagrin. And he offered a lot of other unsolicited advice over the course of many years. Most of which turned out to be good for me, which I hated admitting.

Long story short, I chose children and others in need, I went to Schenectady College, then College of Saint Rose and obtained a degree in Sociology. Eventually Fr, Ralph and I had many bitter disagreements over lots of things and we parted ways. But he had taught me about Unconditional Positive Regard...that no matter who the other person was, no matter their background, their social status, their legal/criminal offenses, their addictions, etc...no matter what they had been through, who they were, each person I encountered was to be looked at as worthy of consideration, courtesy, kindness and assistance. I did not in any have to like or approve of that person but I had to assist in the ways that I could. For the entire rest of my working life in human services, I tried living up to that standard and goal. I surely failed at times but I never stopped trying. Now as a retired person, I still try in my everyday life. For that and lots of other things, I am forever grateful to the late Father Ralph DePasquale.
Posted by Unknown at 7:02 AM No comments:

I am an older white woman living in the U.S. right now. I am following with horror the ongoing harassment of Black people going about their daily activities, living their lives. It seems that each day another story breaks about a Black person doing very normal things at coffee houses, at their colleges, in gyms, on buses, on golf courses…on and on. And then some disgruntled or nervous, “frightened” White person thinks they are “suspicious” or “don’t belong” where they are…and calls the police! Thereby subjecting the persons of color to searches, embarrassment, even at times being taken away to police stations. These things are happening to completely innocent people, here in America in 2018…what the Hell is up, what the Hell is going on?? Racism, race based fear, race based suspicions…call these incidents what they are, please. When I am in shops, coffee shops, in stores, on buses, I’m with people of all colors, races, ethnicities. And please believe me, a person has to be doing something really outrageously dangerous or suspicious before the thought of calling the cops occurs to me! I am deeply disturbed and very unhappy about the actions of my fellow whites…but I do not know how to make them change, except perhaps through education about bias awareness. I do know that kids do not hate other kids unless they learn that from adults…I do not have all the answers but I know things must change for the better, the kinder…we must be inclusive, we must.
Posted by Unknown at 9:08 AM No comments:

Staying inside during this bitterly, dangerously cold Northeast NY weather. But I have no cabin fever...because of the internet. I check in on friends and family on Facebook, check for interesting things on Twitter, share and view photos on Pinterest and Instagram. Send and receive emails and texts...all are routine now. But in 2000 when I got a job with a local company which required computer use, I was a terrified luddite. Fortunately for me, my interviewers told me they wanted my local knowledge of human services agencies and my contacts in those organizations. The owner's son, a kind young brainy tech guy, told me he could teach me the skills I'd need. And it began...I was truly terrified that I'd make devastating errors, I'd destroy necessary data, delete important files...and I did not know anything about searching, mail merge..nada. Day after day, that patient young man taught me. His best statement to me was that anything I did, anything...he could undo. That I could not destroy the company single-handedly. So little by little I did learn how to research, how to email, etc. I then wanted my very own computer at home, I got my first IMac. The Apple Store was like Disneyland! Next, at home, I discovered social media, in its' infancy then. I left that job in 2005. My next job required entering data on a federal site...more terror. But that turned out to be ok too. A new Assiatant Director made us text so I learned to do that with the help of young savvy coworkers.. If it had not been for these jobs, I would not be on Facebook, Twitter, Pinterest, Instagram...I'd not be in effortless communication with my son who lives in another state. I would not be researching at the drop of a hat. I'd not have wifi and stream lovely tv shows and podcasts. I am so very grateful to those who helped me overcome my terrors and opened up my world.
Posted by Unknown at 8:28 AM No comments:

Adjusting to using a cane

About 2 years ago the Neuro PA I see told me that I am a "fall risk" due to a whole bunch of issues. But pride has held me back. I now started to walk with a cane, realized a fall and an ER visit would be a far bigger issue than a bit of imagined injured pride. Today the weather is gorgeous in upstate NY so I decided to try taking the bus to the "big" Walmart while using my cane and my little rolling cart. First time trying it for this trip. I am thrilled that I did ok, though I did drop the cane and it fell on a guy's leg...he was kind and understanding. I have a sense of victory because I accomplished this feat of navigation! Staying mobile and as independent as possible for a good long while is my goal.
Posted by Unknown at 10:00 AM No comments:

Well, we have a 45th President now. And he's unusual, to say the least. Safe to say my social and political worldviews are polar opposite from his. And I do have trepidations for sure. But because I'm "in this U.S.A. boat" with him, unless I wish to sink along with everyone else, I have to wish him success in governing our country. I'll keep watching and studying and writing Letters to the Editor and posting on social media as his term in office continues. I pray that he and his advisors and Cabinet will listen to and care about the needs of their fellow countrymen and women. Not just their fellow rich folks, but those of us on low incomes, SNAP, Medicaid, etc. We do matter, most of us have held jobs and contributed to the economy. But those who have not been able to do that matter too. We ALL matter, we ALL deserve good governance. Here's hoping and praying for it.
Posted by Unknown at 8:58 AM No comments: 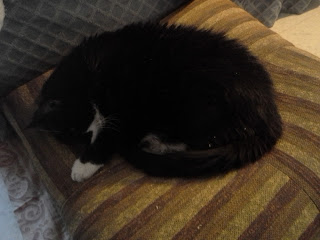 My dear senior diabetic cat Thelma went to The Rainbow Bridge on March 28, 2016. She had developed renal failure and anemia, her poor lungs were filling with fluid, she was so skinny by the end. I adored her, she was a great big gentle scaredy cat who was so patient twice a day every day while getting her insulin injections. I believe she and her dear sister Louise and Pinny Gig the guinea pig are together ATB, having a grand time. <3 They are all missed and still loved.
Posted by Unknown at 9:49 AM No comments: